My elder daughter was after me to pull some ideas for her school activity. Being the best mother I could be, I question her plans on creating a slogan and a poster for the given topics. Being her best in defending her request, she quipped, “I don’t have an idea that’s why I have come to you.” With raised brows, I looked at her attempting to let her know, “Darling, I am not sitting here with a bag full of ideas, that you come and ask me and I pick and give it to you in no time. Anyone can create if one tried.”

Meantime, my younger declared, “Vi, you are eating time from my study hours.” Elder tried to defend herself. And their tu-tu, main-main, continued for some time.  After a while, when I realized my time flying in-between them, I intercepted. “Vi, out of the 3 given topics, figure out the one close to your heart? What is that you would like to follow in life to bring about the change? You think in those lines and get back to me after this girl’s study time. Ok?” “Ban on use of one-time plastic.”, was her immediate response.

I wanted to debate over that. “Darling, I sent a mail to your principal last year requesting to avoid/eliminate the use of transparent plastic paper wraps for books. You were aware of it. Yet, you were so adamant to wrap the books with the same one-time plastic this year even after my repeated requests because the school follows a certain uniformity. Phew!” Never mind I just brushed it aside, for I could see my younger’s mind working within. I was afraid of facing her tantrums if I indulged in some more talks with the elder. “Ok, we will work it out later.”, came a simple situational reply.

While the elder was about to leave, the younger declared, “Vi, Be the part of the solution, not pollution.” She created a slogan for her elder’s work. I looked at my elder and said, “That’s a good one, Vi. Probably some pictures to demo that in your poster will do the job.” She too was convinced. Their tu-tu main-main turning into “hum saath saath hai” brought a hearty smile to our faces. 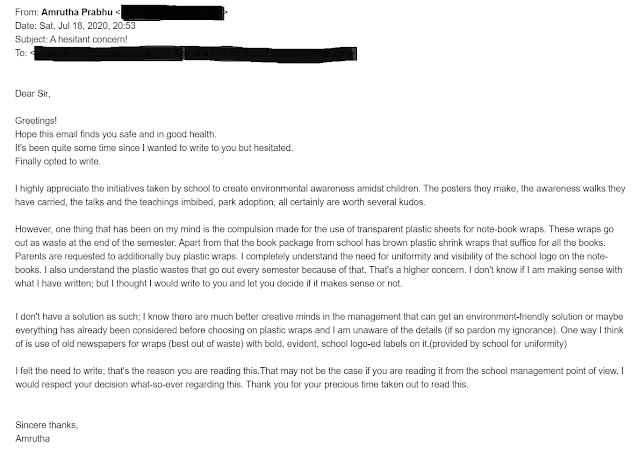 January 20, 2021
As I grabbed a glass of water  in one hand this morning, the other logged into WhatsApp to quickly catchup on updates from groups. One thing that caught my attention was a forward from my Engineering class group. One of them had forwarded the below pic: I had an ear-to-ear smile. I pondered for a few minutes and gave a quick response -  "If you ask me, one wanted to show off his love and other wanted to protect his love. However there was lack of respect and trust respectively which is base of love. So if you ask me, either both qualify or both dont. 😊 or we might have to ask Mumtaz or Sita. 😂😂😂 I at times fantasize and wonder what would 'Ramayana' look like if it were written by a female. 😁" Even after the reply the subject had been running in the background. As they say, to get over it, one needs to get through it. So here I am jotting down the thoughts that waved up my mind.  Though majority of people in and around me very clearly had and have been taking reli
Post a Comment
Read more