Quite some time since I wrote here. Not sure if it was lack of time OR too many thing occupying me OR a writer's block OR just the reason I want to quote for not being here. Never the less, its always better to be late than not being there. So here I am with my little happy note again. :)

Life as all say, has changed ever since corona. I can't agree less on that. For me it has not just been a change outside but a change within in a lot a ways. On that, some other day. :) Here today, to jot an instance, that revisited my learning and asserted it back into me. My little lovely daughter somehow manages to do that over and again.

We all know how the online classes have taken over ever since corona. Be it school, be it out-side school activity, its all online. While I have got mixed reactions from different kids, my younger has never appreciated the online classes. Only thing that she likes about the online turned schooling is the exam system, which is multiple choice oriented(which she can attend even without preparation :D) and she only have to understand the concept and there is no peer pressure of byhearting notes given in school. :)

With classes going online and she not very appreciative of it, discontinued her classical dance and music class.  She all the while wanted to go to a class which was in-person. She also wanted to try western dance. I found one for her and it was a demo class.

We bumped into the ongoing western dance class for enquiry. For her surprise she was asked to join into the class for a demo. She, not being an open-up-at-first-shot-girl was hesitant and resisted joining the other more-than-ten kids who were already on their toes. However she obliged on my request. I sat there watching the kids.

Kids were paired (not sure on what basis) and each had to teach the other for a given few minutes and perform the given step in front of Mr T, the dance master. And then he would grade them out of ten, both individually and as a pair. Though I am not a big admirer of ranking system, I understand that I am part of the system which is completely into that. I continued watching. It was interesting. I did realize that Shu, my daughter found it hard, for her pair mate had tough time teaching a new bee, adding to the fact that she did not know the step very well herself. There was a minimum score that each had to get through. Failing which they were eligible for punishment. Punishment were not hard, but in turn designed for improvement itself. I could see a full on competition mode. First round ended. She scored one. She was punished, of course with all others who had scored 10 on 10 or  in-between 1 and 10.

The second round started. They had to perform better. I could see fear in my little one's face. She was uncomfortable. But she sat down silently until her turn came up. When it was her turn, the pearls that she controlled until then in her eyes dropped and she just came running to me.

She said "I dont want to do it. I am not coming to this dance class." She took home on my lap. While the teacher enquired if she was comfortable, I took time. He continued with other kids.

I told her "If you don't want to join this class. It is fine. Don't. But, it was your turn, I don't want you to leave it halfway and come. Go complete it and come. If you want, take your time, compose yourself; but please go finish your turn and come. Its ok, if you are not able to do it well. Its your first day. You can't be great. And don't compare yourself with others, they are here since ages. You just go do, whatever you know and come back. You will feel good."

Instantly came the reply "I am not going."

We both sat there and continued watching others.  A few minutes went by. I took her into my arms and said "I want you to finish your turn and come. You can decide on joining or not later. You are strong enough to go back and pick it up."

She was silent. I knew it was time for me to keep quite as well. We sat there watching the rest. At one point, T asked her if she was ready to perform. Not sure what went on in her mind, she got up, took her place and position, and performed whatever little she had learnt from her dance partner. She finished with a score of two. She felt good. I was proud of her. She had gathered herself to finish up the class.

While driving back home, I said "I am really proud of you. I will get you something for not giving up."

Immediately came her reply "You will have a date with me at Delice. Only me and you."

I smiled. "What about Khu and Vi (her sisters)? Would you not like to take them with us?" I quipped.

"No, only me and you. If you want you can pack something for them." came the reply. "Okayieeee, Treat at Delice is confirmed. We can decide on whether to take Vi and Ku later."

I continued "What about the classes? I liked it. I know this is not your usual way of learning. Its uncomfortable for you. But think about it. You would come out stronger when you get into uncomfortable zone and walk out of it with comfort. I would certainly want you to join this class. May be you can try it for a month, and then if you don't like it at all, we can look for other class."

"Okieee, Okieee you have told me this earlier also. I will decide and let you know. Anyhow the class is from next week right?", she was considerate.

We laughed and reached home. I somehow wanted to let her know that it does not matter how good or bad others are in what they are doing. What matters is we got to be better version of ourselves in whatever we do. Nothing else should bother us. One way I knew I could connect with her was poems. Below is the poem I wrote for her, with painting in consideration, for I could connect with painting better than dancing. At times, I find my small ways to get the things across. :)

(Adjoined below is one of my old paintings. You can check my other paints/sketches at  @ap.artoons ) 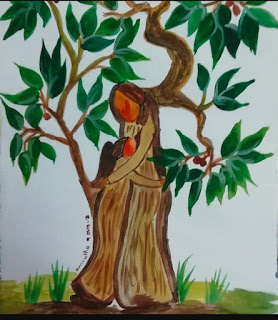 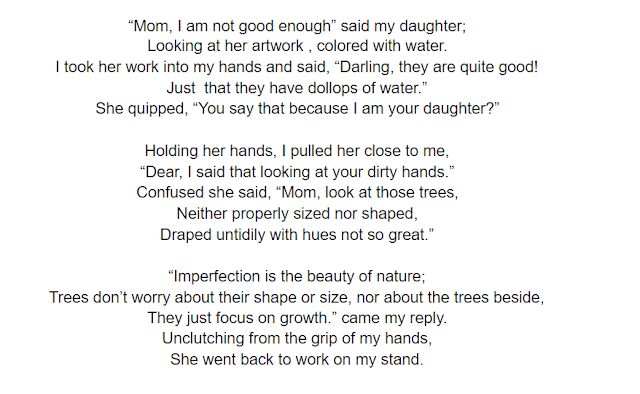 Of course, you guessed it right.  She joined the dance classes on December 1st and promised me to learn there for at least 6 months. My little one reminded me the little things I had learned but had forgotten. She always has her ways of teaching and/or re-iterating things in her own ways. Yeah! you guessed it right again. That's the very reason you see me back on the blog :D