Honestly, if one asks me to choose a favorite movie, it would be like letting a lady into a huge jewelry store and restricting her to pick just one, with no strings attached. Some are antiques, few others unique, yet others expensive, while many are attractive. Ask a lady, and she can delineate how tempting it is to pick up most of them and how hard to restrict it to just one. Allegedly for me, its very hard to pick one movie of the many lot that I have watched. Some were entertaining, others eye-opening, some educative, few others time-pass, many inspiring, a lot of them my night-study companions. 😊 There is nothing so fleeting as watching a movie, yet there are a few that leave you influenced for the life time. One such for me is – 12 Angry Men.

12 Angry Men - It’s a tale of remarkable insight into the upsurge of economic, social, cultural thought process witnessed by the eyes, brains and hearts of the 12 angry men in a jury room. The evolution of the consensus in a closed room depicts the general nature of the humans, i.e. to judge by their prejudices. It’s a socially conscious, psychologically driven piece. 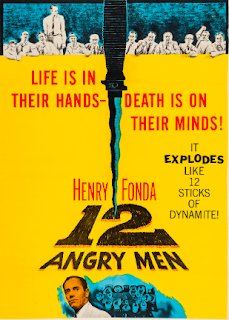 The story - Premeditated murder being the most serious charge tried in a criminal court, the judge hands the responsibility of separating the facts from the fancies to the 12 juries, each coming from different background. One man is dead and the other’s life is at stake. The judge demands an unanimous verdict, be it guilty or innocent, from the 12 appointed juries. It’s a great responsibility vested on the juries. One room, 12 men and the heated arguments! Parched, cantankerous, formidable men sat round a table all evening briskly pouring their prejudiced opinion thereby delaying the decision on the verdict. The arising tensions offended  the men in the room and also teased the scorching weather outside. The stories of personal triumphs and tragedies unveil, with a distinguished warmth, humor, lack of sensitivity or a stamp of reality; thereby breaking-down each evidence, that otherwise screamed, the accused, to be guilty. Starting at 1 v/s 11, its highly interesting to watch the juror’s vote gravitate as the movie and the talk advance. Hats off to the director, script writer and the 12 actors who manage to resonate into viewer’s mind with every scene and delivered dialogue.

Never make decisions out of anger - It is very rightly said by Greek philosopher Aristotle that “The angry man wishes the object of his anger to suffer in return; hatred wishes it’s object not to exist.” In the movie, in the beginning, all 11 jurors wanted the accused to be dead for each of them hated him for the reason of their own - one for his economical, social and cultural background; another for being brutal to his father; another for robbing his precious time which other wise would be spend making some bucks; yet another for having to let go of his evening entertainment. Everybody had their own reasons; but for one, who was not sure of the guilt of the accused. He wanted to talk the matter out until things were convincing either to him or to the others. He was also angry, but not on the accused 18 years boy, on the 11 other jurors who did not realize that a life is dependent on their single word verdict – guilty or innocent. The very same philosopher aptly quotes “Anybody can become angry – that is easy, but to be angry with the right person, and to the right degree and at the right time and for the right purpose, and in a right way – that is not within everybody’s power and is not easy.” It beautifully fits the 1 juror who stood against the 11 others; and hence the name 12 angry men, not 11.

Fear is temporary, regret is forever - The discussion starts with a voting that resulted in 1 (not guilty) v/s 11 (guilty). Most of them unhappy about the voting, found it ridiculous, to spare time discussing the evidences that were produced and already argued in the court room. They pounced on the juror who voted against 11 of them. He stood alone, yet very strong, for he was not sure of the guilt and valued life more than his time. It’s not easy to stand alone against the ridicule of others. It takes a great deal of courage to stand alone even if you believe in something very strongly. He did, and did not regret it; thereby giving a very strong message that we should stand up for our values, no matter what, for at the end, if not anything, one would not regret the action.

Prejudice is the child of ignorance – Prejudice creates a closed mind. A mind is like a parachute, works well only when it’s open. The jurors in the jury room had a strong prejudice and hence failed to see the possibility of the accused being innocent. It took a man and his ability to place himself outside his thinking, to look into problem as a third person. That in turn guided others to open up gradually and at a point contribute in their little way possible to come to a final verdict.

’12 Angry Men’ has also been remade in Hindi with the title “Ek rukha hua faisala”. However the black and white version; and the portrayal of each character and his emotions in the English movie is just mind boggling. I can watch these 12 angry men anytime any day without being bored.😊 Every time I watch it, I find a new aspect in it. The movie undoubtedly has many more small yet significant carry-aways. For me, the movie has out stood in telling the above 3 with all genius and compassion by the story teller.