Willing is not enough. We must do! - Bruce Lee

January 05, 2020
Little things around me trigger the inspiration button. Not sure if its a good trait or bad. Nor do I want to analyze that; at times, I have burnt my time, money and some grey cells because of it, while at other times they have taught be my best life lessons. :) Several such instances which triggered the inspiration button were when I was working in the IT industry. One of them is taking an entry into my little happy notes.

Several months after that incident, I learnt about a colleague and a mother who took swimming classes in Basavanagudi. Yeah, you guessed it right! There was a trigger. The very same week, I went hunting for exclusive women swimming classes. I visited Basavangudi, R P C layout, and R T nagar. Of all, be it in terms of the pool size, or the exclusive lady coach, or the daily classes and the fair cost, Basavangudi I thought was the best. However since I was a working mother of 2 kids, I assumed, the morning timings did not suit and the night timings would jeopardize the balance. Of-course my colleagues who had already been to classes said still they needed more time and learning in water to swim; they said they partially managed to swim. That worked on the back of my mind. Then I dropped the idea again reasoning that 1 month would not suffice to learn swimming. (*Lesson 1 and 3)

Days went by. It was June 2018. I was not working in IT industry anymore. There was this doodlewash tigger that had put me on 30 day water color challenge for the water color month. (Oh! crazy me and my triggers!) The prompt for the water color on June 24 was 'pools'. I only could think of me swimming. Here is my water paint. 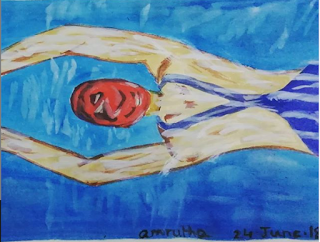 Find my other paints here.
(Wait! Am I revealing my identity? Yes. Writing was also a trigger (super crazy me!), I started writing with a pen-name to vent out, now its a scent of life for various reasons. More over my daughters were after me to go out with my real name and not the pen-name. Here I am, Amrutha (Sudha is it's synonym in Sanskrit), meaning the Nector, Amrutha also means the immortal. Incidentally, Nector has no expiry date, so its immortal. I am 200% sure I would not be there one day but these sweet little happy notes will stay back.)

Coming back to my swimming trigger, the prompt for the paint had the so called chemical locha (chemical reactions! Yes, its a fact that every emotion has corresponding chemical reactions and viceversa.). I went back to Basavangudi to recheck. This time there was a progress. I also visited their small swim suit stall. I checked on the cost and then made a visit to Decathlon. I checked the cost of different suits there as well. All of them were more than a 1000 bugs. Now my usual middle class mentality kicked in. It said "What if I buy this and I end up in not learning to swim? This dress would go a waste, so would the money." So the idea of swimming obviously dropped. (*Lesson 1 and 3)

Days went by. May 2019 we moved to a rented apartment. There was this swimming pool as an amenity that just was good enough to trigger me. (aaaha! the child in me went on a laa-laa nostalgic trip.) This time when I went to the Decathlon, without the second thought I bought a swim suit after a trial. There is a catch though, swim suit was compulsory for using the amenity in the apartment.

I had declared to kids that I would learn swimming way back when we moved to the apartment. Kids had already started to cool down in the pool, to beat the summer. I was counting days. I love water; but then there was this thought of what if the water gets into my mouth or ears or nose; what if my migraine is triggered. What if that, what if this. :( Every time my kids, or my husband, or my mother (Yes, she knew swimming! Village life has its perks.), or my brother or my sis-in-law, went into the water; I would sit and watch them or I would walk out after I got bored of sitting and watching. (*Lesson 1 and 3)

School had re-opened. It was some time June or July. Kids still continued their pool trips intermittently. During one of those pool visits, my elder asked me 'Why did you buy the swim suit?' I said 'To swim.' She continued 'Then why are you not coming to swim?' I had no answer than to say 'Yes, I am coming.' Then I ended up in pool. Finally, I was in water. And in the 5 feet pool all I did was walk and watch my daughter swim. The fear of failure, or the fear of what would he say or she say had not let me try openly. But then I wished I could swim. Mind you! there was everything that was needed for a person to learn swimming. This aqua-walking and watching continued for several days. (*Lesson 1 and 2)

Restless mind, did not let me sleep for I knew I had not given my shot, forget about best. Next day after dropping the kids to school, I went to the pool. I got into the water. I held to the pool side rod and went horizontal. I took my face into water and stayed there for few minutes. I repeated this until I was bored of doing it. Next I held the head high, body horizontal, hands still holding the rod, I started flapping my legs into the water. I repeated this until I got bored of that as well. Now I took a floater and tried to float. Voila! I was floating with the floater in my hands. And it had kicked in. I went back home happy.

Next day I came back. I performed all that I did previously. I wanted to float without support. I threw the floaters away. I went to the edge of the pool, folded my right leg back to rest on the pool wall, pushed it hard and held my hands and body the way they are in the painting above. And there you go, I was floating without support; but only a few meters. I did not realize that I was in pool for 2 hours. There was a kick. I went back home happier.

The third day I came back to the pool. I wanted to swim. I tried and tried but failed. But the warrior in me did not want to let go. I took a break, stopped trying to swim, I went back to floating. I tried to float for a longer distance. I tried flapping the legs along floating. I was easily able to do that. But the moment I tried to use my arms to swim, I badly used to drown into the water. I looked at the clock hung on the wall. I was in water for more than 2 and half hours.

Learning to swim may look a very small thing on the outset but I had life time lessons to carry with me.
Lesson 1: Willing is not enough. We must do!
Lesson 2: Never fall into the trap of 'what will people say?' (Overcome the fear of being judged)
Lesson 3: Put yourself out of comfort zone (Overcome the fear of unknown; unlearn to learn)

As I think back, I wonder if there are any other fears that can stop us from doing something that we want to do?

January 02, 2020
(Migration to Bengaluru - how the problem of population due to migration be solved was a topic of assignment for our creative writing class. Bangalore being home for me this is how I look at it.) It’s not every place on earth where bright sunlight lashes on the face and the cold breeze chills the body at the same time. Not every place can exercise diversity. From early morning variety dosa to late night smoke breaks; From temple walks to bike rides; From pool side beer to traffic in the burning sun; From non-stop chats to serious weekend talks; From street beggars to IT jobbers; From theatres to multiplex cinemas one can see extremes in any aspect chosen. Such a free city is ‘Namma Bengaluru’, and that is why a lot of people hope to come here. So, evidently there are many economic, social, and physical pull factors why people migrate to Bengaluru.  The first thing is a ‘brain-drain’ of IT hub. However, Bengaluru is not only IT capital but also capital of aeronautics, automot
Post a Comment
Read more