January 02, 2020
(Migration to Bengaluru - how the problem of population due to migration be solved was a topic of assignment for our creative writing class. Bangalore being home for me this is how I look at it.)

It’s not every place on earth where bright sunlight lashes on the face and the cold breeze chills the body at the same time. Not every place can exercise diversity. From early morning variety dosa to late night smoke breaks; From temple walks to bike rides; From pool side beer to traffic in the burning sun; From non-stop chats to serious weekend talks; From street beggars to IT jobbers; From theatres to multiplex cinemas one can see extremes in any aspect chosen. Such a free city is ‘Namma Bengaluru’, and that is why a lot of people hope to come here. So, evidently there are many economic, social, and physical pull factors why people migrate to Bengaluru.

The first thing is a ‘brain-drain’ of IT hub. However, Bengaluru is not only IT capital but also capital of aeronautics, automotive, bio technology, electronics, space science, defense science and silk industry. Being a kind metropolitan city, it actively recruits young population in these sectors.  These job seekers are then often followed by families.

Bengaluru though is sophisticated, is an extremely kind city, be it in terms of befriending non-Kannadigas or the Kannadigas from other districts and rural places, it has always welcomed everyone with its open arms and embraced them as if it were their home town.

Because of the high elevation, Bengaluru has often been known for its pleasant climate. Its moderate hot summers and comfortable cold winters has always attracted people around the world. 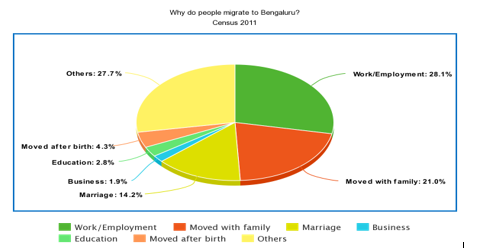 What is even more interesting is that the city has become home for many migrants. There have been no thoughts of home-calling for the majority of them. The 2011 census data (on the left) depicts the same. The majority states from where migrants come from include Tamil Nadu, Andhra Pradesh, Kerala, Rajasthan, Maharashtra, Uttar Pradesh, Bihar, West Bengal, Odisha. For most of them Bangalore is now their home town with some of them playing with their next generations in their accepted home city. With generations making the city home, there is no sense of homesickness for them.

Migrants indeed have been one of the reasons for the so-called Bigger Bengaluru. Being a Bengaluru product, I have seen Bangalore becoming Bengaluru as I grew up. I go nostalgic over a few specific ones. (Of course going nostalgic was not part of this planned article, I got nostalgic when I read through an article in internet. The ones in blues are the ones that made me nostalgic.)

Old Airport was considered the end of the city. The newspapers used to carry the weather report of Bangalore and Bangalore airport. (Dad used to take math classes early in the morning at 7 everyday. Newspaper in his hands was a common scene when I used to reach out to him for lessons. Newspapers then and now is like waterless chai and chai :D; today there are more ads than contents.)

Yelahanka was a satellite town to Bangalore and was not part of Bangalore. Today; Yelahanka is the most crowded locality of Bengaluru. The city ended near Mekhri circle. A rich flora stretched from Mekhri to Yelahanka then; today, one can see richer concrete buildings and pillars stretching in those areas. (My memory of Yelahanka as a kid was just that of forest, forget Yelahanka, 15 years back even Hebbal was not a very known place and full of greens. Today, Hebbal is a very happening place, with a credit of tech park and lake view attached to it.)

Peenya was Asia’s biggest Industrial area. That’s were west of Bangalore ended. (Back then as a kid when I went to Peenya, it left like travelling from one city to another.)

Single screen theatres were cool. Multiplexes have changed the concept of movie watching today.
Utility building was the tallest of all. It could be seen from far off places. Today it’s an unimaginable situation. (Movies trips that dad took us to and his office near utility building are both strong memories in me)

Bangalore was a chilling destination because of it weather. If people think Bengaluru is the coolest city, they should travel back a few decades back to check on what it was then. (People today are seen moving out of Bengaluru due to dust allergies, it was other way round back then)

Life in Bangalore ended by 10. People today are seen either in the pubs, or in the traffic, or in their office chambers at this time in the night.  (I was scared to go at 9pm as a kid, for the roads used to be empty and it used to be dark by then.)

Kannada was all alive in Bangalore. Those were the Golden days when the city’s culture, heritage, tradition and language were up held. Bengaluru today is mostly a ‘Kannad Gotilla’ place. (Despite of fine's imposed at schools to adhere to English speaking, we would still end up talking in Kannada, today unknowing English dominates and gets in even when we talking to people at home.)

Bangalore was full of vataaras. Bengaluru today is more of apartments and townships. (We stayed in a vataara as kids.)

Double Decker buses were very kid’s fantasy. Red BTS buses and the black autos were a common means of transport. Ambassador, Fiat, Maruti 800 were luxury then. Today, car has become a common man’s necessity. (Double ducker were our look ups when we had to reach out to uncle's house in Indiranagar. Black autos were our sawaaris when dad used to take us out for a moving outing. Ambassador's, Fiat's, Maruti's were a matter of envy when people used to visit us in those.)

If a localite is questioned on the current status of Bengaluru; majority of them are ought to blame it on the migrants. Is that the actual reason for today’s state of Bengaluru? What is the reality?

Generally, on a larger scale,

I strongly believe, influx is not alone to be blamed. If politicians conspiring with land mafias for selfish motives form one part of the problem, the other part is the lost individuals who are busy running their rat races and least bothering about the gradual changes that is diluting the core essence of the city they live in. One can find more individuals and organizations portraying service to society as their purpose but achieving their selfish motives. If job opportunities are created in every city and the state government ensures talent development in their respective city/state; and focus on talent retention, why would people look out for migration? They would only look out for vacation. 😊

Can just changing the name from Bangalore to Bengaluru uphold the culture, tradition or heritage of the place? While we understand and adapt to the importance of globalization; is it not our responsibility to pass on cultural heritage to our next generation?
BBMP pick up multiple projects simultaneously and delay all of them. Can this not be better stream lined to focus on one project at a time and facilitate more jobs and permanent jobs for localities?

What is the solution?

It is not as obvious as it appears to be. We the localities and Politicians (when I say politician(s), it is not someone in power, it is someone who is in a state to bring about the needed change for the society and not for selfish reason(s)) paint a reason to be the ‘outsiders’ for the current state of Bengaluru. On a serious note what steps have been taken by us as individuals or the current leaders or the previous leaders to address the increasing population and the constrained space of ‘Namma Bengaluru’? Is more concretion answer to this? Are we lacking leaders who think in directions to blend the need of globalization and yet uphold the uniqueness of the city? or has the society lost its morale to choose a right leader to lead the city in the right direction? or Is there a different dimension to this that I am unable to see?